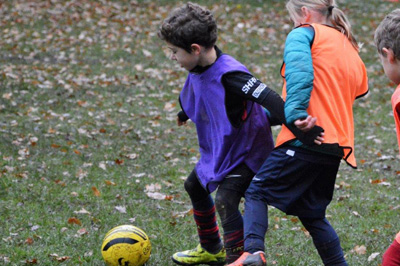 Kids Works football classes are fun – so much so, you may not see the meticulous planning and support that goes into every class that we teach. Below is a sample lesson plan to give you an idea about how our classes are set out for our coaches and how much we aim to achieve in every class.

At this age we try to build on their core skills, and while it’s still fun we increase the challenge by bringing in group practices and team play. This helps the development of social interaction and cooperation. Whatever their level, they are encouraged to feel and act like a ‘professional’.

Warm up and register, split groups.

Divide group in half, one Gk (change every few minutes) Ball each, stand by a cone close to the side line. Each group takes turn to dribble round cone and shoot, they collect their ball, or Gk rolls it to other side, and join back of other line. Allow a small gap before next player goes. Progression; move the cones to sides to encourage a shot not directly in front of goal. Add a defender. Use weaker foot to shoot.

Look up and keep ball close to feet. Do not stop when reach cone, perform the shot on the move, so keep ball in front. GK hands ready, body spread and narrow the angle by coming out.

Colours Game. 2 teams (bibs). Half number of balls to kids. Balls given equally to each team. Players with ball dribble around the area and can only pass to a player with DIFFERENT colour bib (who is calling for the pass). Progression: same as before, but now the players learn to pass the ball into space for the other player to run onto. Add cones for players to avoid (acting as static opposition players).

Player with the ball must look up and move into space. Explore using the inside/outside for short pass to player. Encourage strong pass to players and stop play now and then to show how to open space up.

Warm down, review and finish.

Have a look at what goes on at Kids Works Soccer School. Here is a gallery for you to check out the classes for 5-7 year olds at Kids Works. 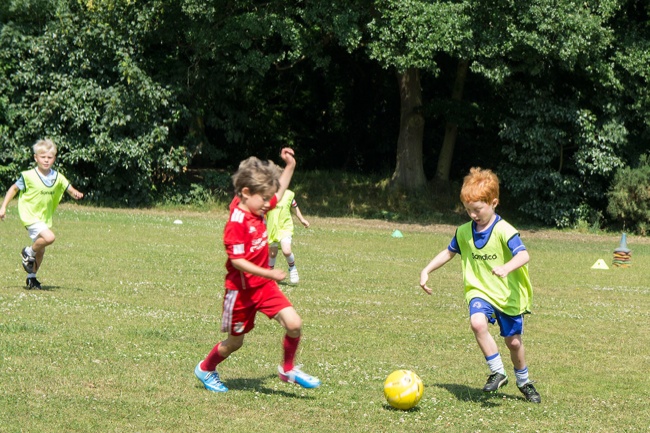 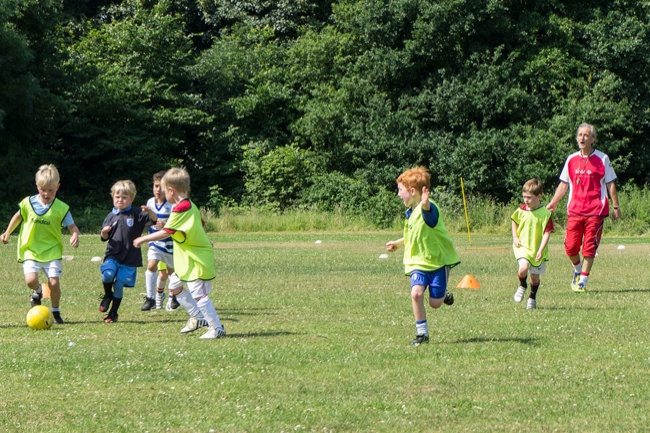 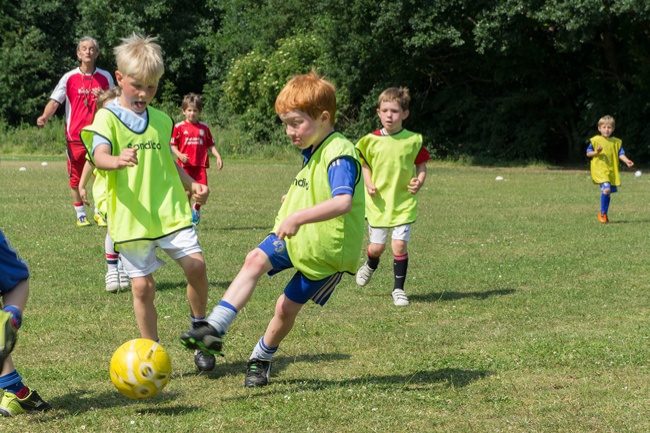 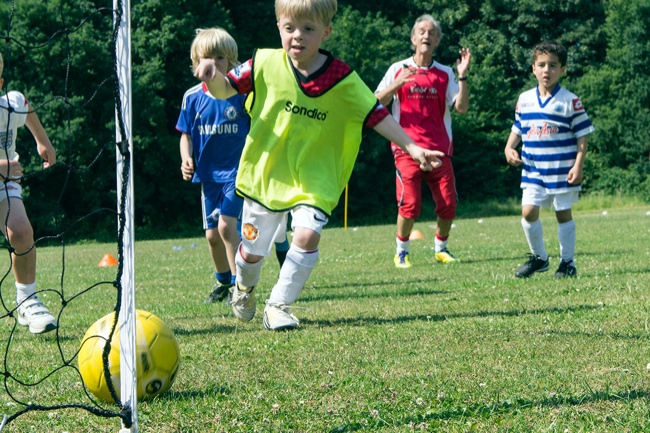 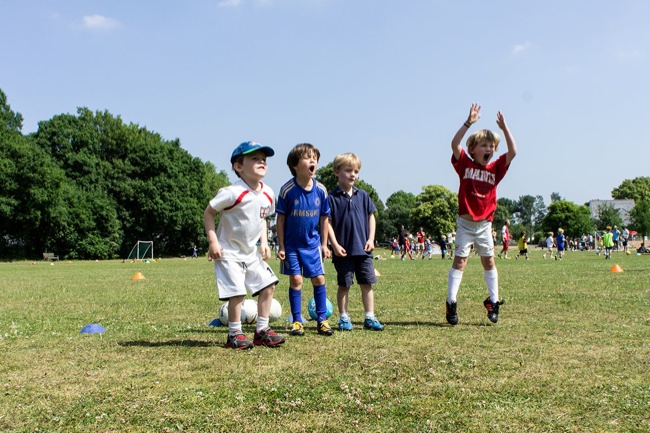 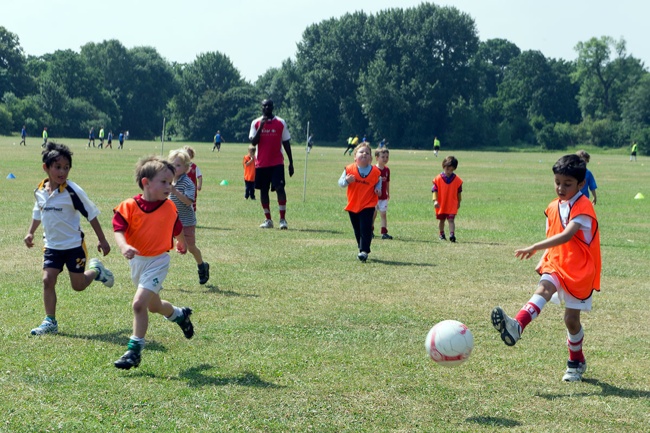 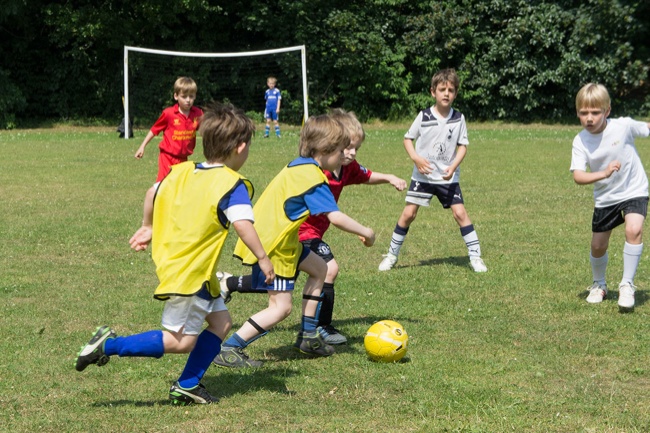 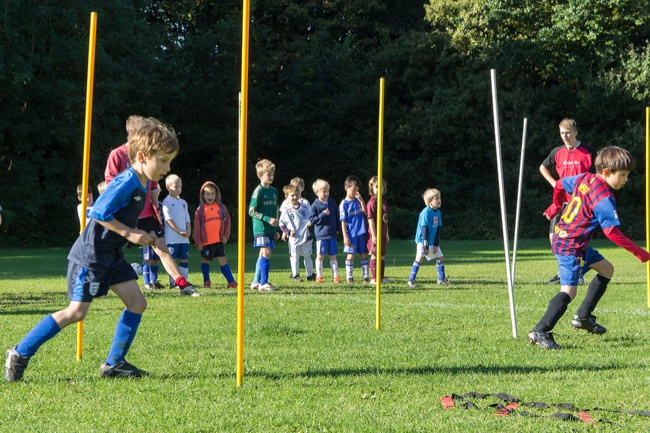 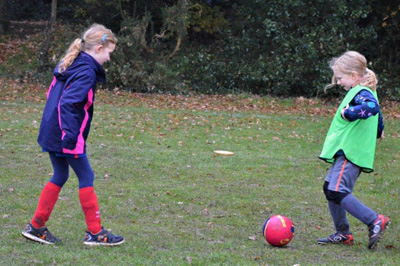 The Summer term started with such excitement and it was fantastic to see the children enjoying what they do naturally… Their enthusiasm and energy were boundless and the simple joy of meeting up with all their friends, outside in safe and structured sessions, was so rewarding to see. Read more>

This website uses cookies to ensure that we give you the best experience. If you continue to use this website we will assume that you agree to our use of cookies.Ok, got it!Privacy policy